NOTE: 5G connectivity will vary based on the local operator capabilities

The Google Pixel 6 Pro features an almost bezel-less screen. It uses a 6.7-inch LTPO OLED display from Samsung, featuring QHD+ resolution, HDR10+ certification, and a 10Hz-120Hz variable refresh rate. It also supports the Always-On Display mode. The smartphone has stereo speakers and an IP68 rating for dust and water resistance. 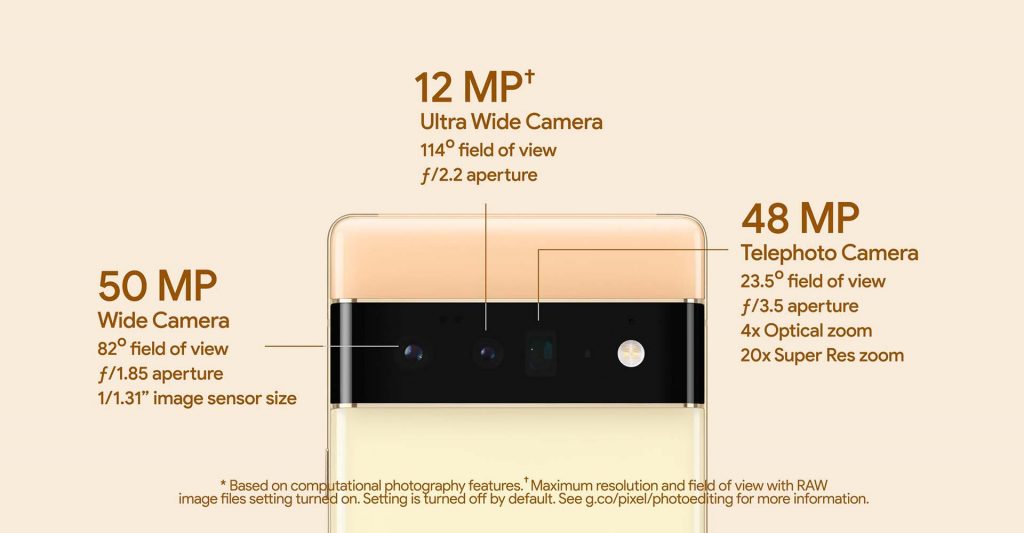 It has an 11.1MP front-facing camera (F2.2 aperture) hidden inside the display’s punch-hole-shaped cutout. At the rear, it has a triple-camera setup, featuring a 50MP wide-angle camera, a 12MP ultrawide camera, and a 48MP telephoto camera with 4x optical zoom. The smartphone has a dual-LED flash, Panorama, Live HDR, and HDR+. It can even record up to 4K 60fps videos with live HDRNet+. 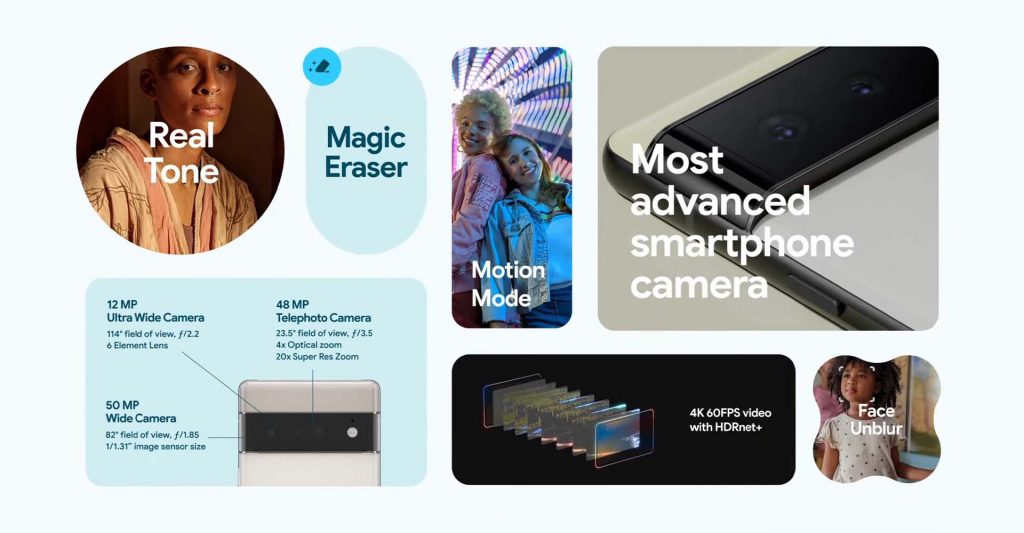 Apart from new hardware, Google has worked a lot on the software front. The company was already deep into computational photography and starting with the Pixel 6 series, it has introduced some new features. Real Tone tries to capture skin colour for a variety of skin tones. The Magic Eraser mode suggests unwanted things that you can remove from images. You can also manually tap on things in an image to remove them. The Face Unblur feature makes sure you capture the right moment and the faces of kids, pets, and other fast-moving people don’t come out blurred. The Motion Mode blurs some moving objects in the background for a more dramatic effect. 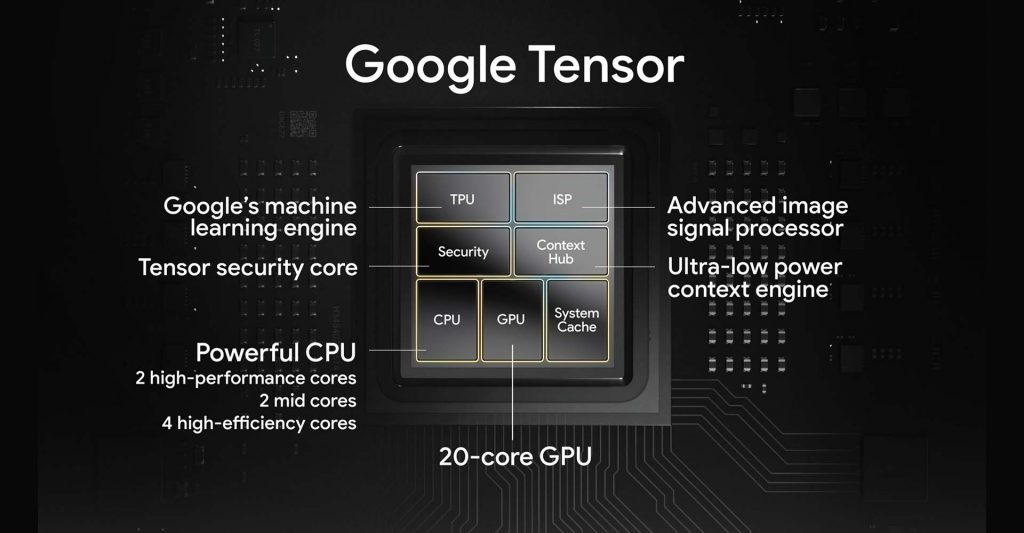 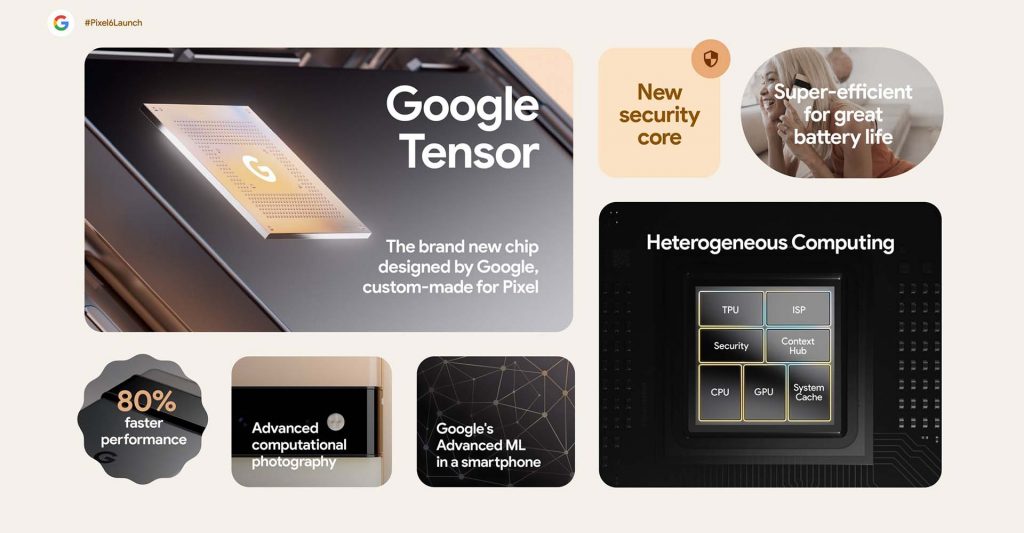 In terms of connectivity, the Pixel 6 Pro features 5G (mmWave and sub-6GHz), GPS, Wi-Fi 6E, Bluetooth 5.2, UWB (Ultra Wideband), NFC, and a USB 3.1 Type-C port. The UWB feature can be used to lock and unlock compatible cars and door locks. It lacks a headphone jack, similar to most other high-end smartphones. It has a nano-SIM card slot and an eSIM. Technically, you can use the Pixel 6 Pro in dual-SIM mode. The smartphone has an under-display optical fingerprint reader, making it the first device in the Pixel series to feature such a fingerprint sensor. 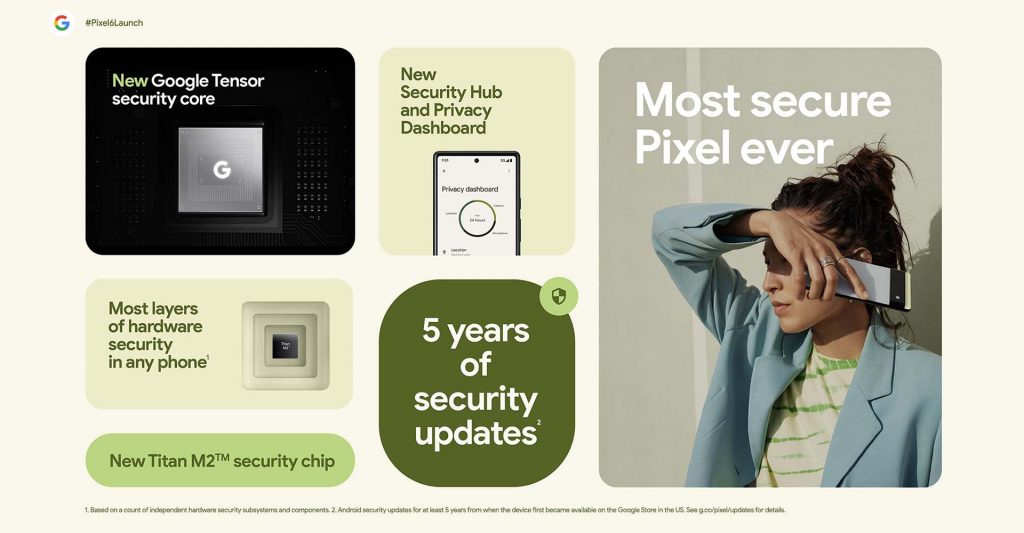 The phone runs Android 12 out of the box with the Material You theme. Google has promised to offer three major Android OS updates to the Pixel 6 series along with security patches for five years from its launch. The Pixel 6 Pro is powered by a 5,000mAh battery that supports 30W wired fast charging (USB PD 3.0 with PPS), 23W fast wireless charging (via 2nd Gen. Pixel Stand), and reverse wireless charging. The smartphone comes in three colours: Cloudy White, Sorta Sunny, Stormy Black.